Amongst its several use cases beside fin-tech, supply chain management might be the most promising application of blockchain technology. Originally envisioned as a way to radically transform money and global payment handling by Satoshi Nakamoto, Bitcoin and by extension Blockchain technology has paved the path to fundamentally transform several other industries. This article aims to deconstruct and highlight potential problems faced by the supply chain management industry today and how blockchain technology might aide to solve those problems. Current projects which are working towards tackling this niche are examined and assessed.

What is 'Supply Chain Management (SCM)’?

Supply chain management is the management of the flow of goods and services and includes all processes that transform raw materials into final products. It involves the active streamlining of a business's supply-side activities to maximize customer value and gain a competitive advantage in the marketplace.

Globalization has posed several problems to supply chain management. Given that several companies have opted to move different manufacturing and key production components to different countries based on factors such as lower labor costs, lower regulations, abundance, and availability of required raw materials, the whole manufacturing process is scattered and lacks efficiency. Having to deal with and manage multiple global suppliers, contractors, and inventories, the lack of proper management and logistics could cause increased production costs and in return higher prices of goods. It is in manufacturers’ best interest to streamline the production process and reduce the costs of goods as much as possible to compete in the free market. 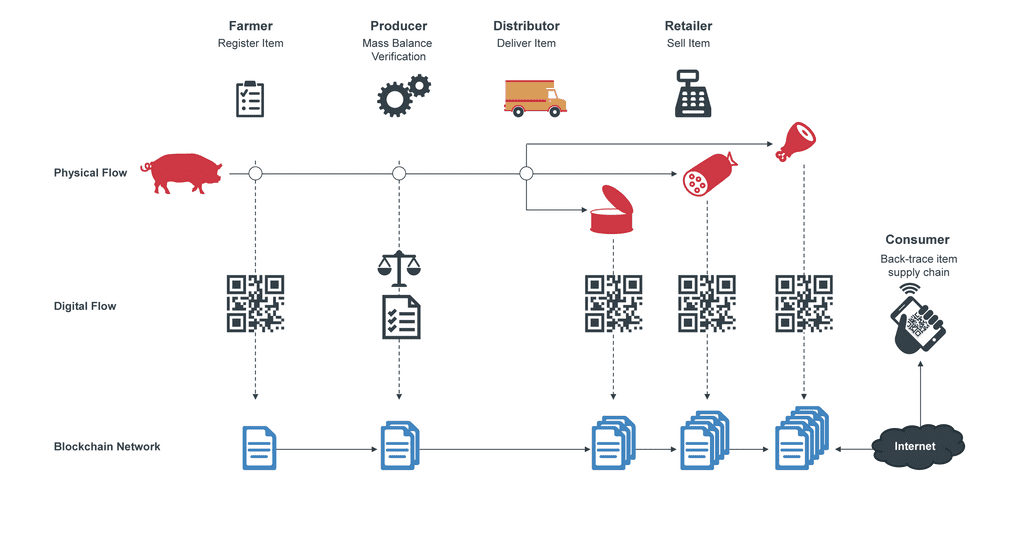 A WEF (World Economic Forum) study estimates that increasing efficiency in supply chain management would increase global GDP by almost 5% and total trade volume by over 15%. Quality of the goods produced is also a major issue for manufacturers and customers. A WHO (World Health Organization) report states that 1 in 10 medical products circulating in developing countries is either substandard or falsified. In the modern information era, any quality issue or a product recall would be clearly highlighted and be placed on a pedestal subsequently costing the company dearly in remanufacturing and brand image value. Compliance is another key challenge for enterprises. They have to make sure to not only obtain the right permits and licenses required but also have to ensure that their products pass the regulations placed in the respective jurisdictions. Ethical concerns such as exploitation are also often raised as evident from the case of mining of blood diamonds (also known as conflict diamonds).

A report in which companies across 64 countries were surveyed stated that about 69% do not have full visibility into their supply chains and 41% still rely on excel sheets to keep track of supply chain disruptions. It is reasonable to conclude that the global supply chain management system has a dire need for more traceability and transparency. Blockchain by its inherent nature is designed to be secure, transparent, and immutable. This makes the platform optimal to track assets and protect critical production data. Using this distributed ledger technology, enterprises can make their production lines more transparent and efficient subsequently making the final product authentic, cheaper and compliant. Not to mention the fact that having such a system in place would help eliminate fraud, identify issues and errors faster, help solve disputes, and increase trust internally and among the customers. 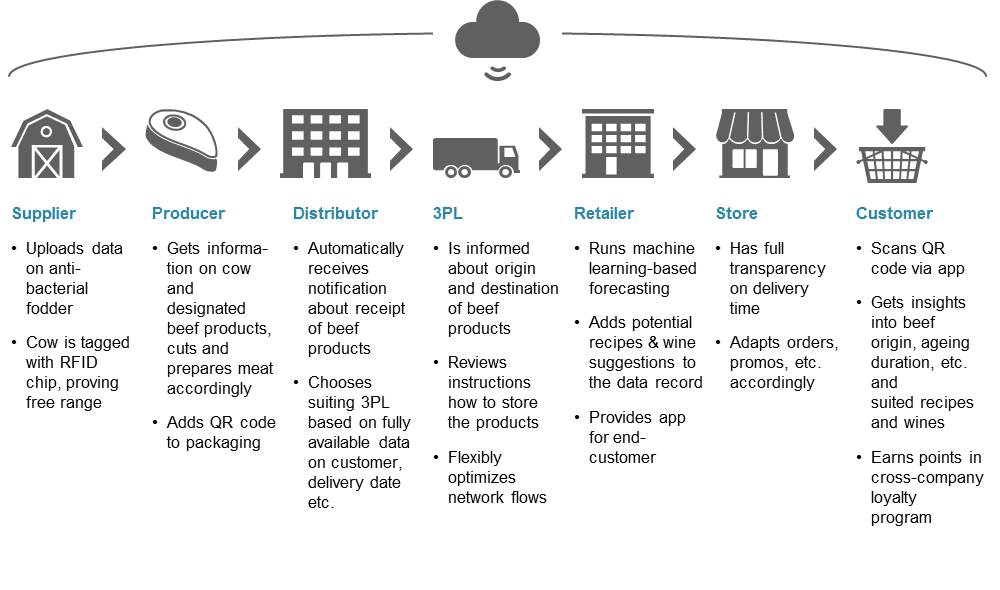 The application layer of the blockchain integration would be robust and complex with multiple features. For example, IoT-based sensors could be placed in packages or shipments. Such devices would help monitor and control parameters such as temperature and humidity (in thee case of food) to make sure there is no wastage. These devices could automatically feed data onto the permissioned blockchain preventing human involvement or tampering making the whole process trust-less and secure. Blockchain could also be used to store invoices of handling of shipments to prevent theft of valuable assets. Smart contracts could be embedded to handle payments across the process swiftly by triggering monetary transactions to the respective entity upon completion of the required task. There could be different classes of payment (depending on quality, number of conditions met etc). In such a system the suppliers would benefit from the trust and brand value obtained from the markets, the retailers would benefit from the decreased risk of counterfeit products, and similarly, consumers could benefit from the transparency and the ability to choose products that align with their preferences and values.

Hyperledger is an open-source collaborative effort hosted by the Linux Foundation to create advance cross-industry blockchain technologies. Hyperledger Fabric is an open-source blockchain framework implementation by the project and it’s their flagship product. Fabric has provisions which allow building a supply chain mechanism on their platform. The project also released an enterprise solution called Sawtooth which helps you trace the provenance and other contextual information of any asset. The organization has put up a demo of the application utilizing the tool to demonstrate tracking of seafood supply chain.

IBM which has been actively working on blockchain-based projects also has an enterprise solution for supply chain management. IBM partnered with Walmart has announced Blockchain Food Safety Alliance collaboration to improve food tracking and safety in China. Earlier in 2016, IBM and Walmart partnered with Tsinghua University to kick off a trial to track the supply chain movement of Pork exports using the Hyperledger platform (co-developed by IBM). IBM aims to integrate its IoT solutions and Watson AI to further improve this process.

There have been several successful thriving blockchain implementations so far. The most notable one being Everledger. Everledger is a UK based startup which uses blockchain technology to track the provenance and authenticity of high-value assets such as Diamonds and Jewelry. Diamonds are controversial and have raised several ethical concerns in the trading world because of the existence of counterfeit and blood diamonds. Everledger uses more than 40 features to store an ID of the diamond on the blockchain and tracks their movement right from the mines to retailers. It includes characteristics, history, and ownership of each diamond which can be accessed by all parties on the supply chain at any time. Everledger claims to have cryptographically secured over 2 million diamonds over the 3 years of their existence. The company has been well received among diamond mining companies and has been adopted by them. The company has raised $10.4 million in a series A funding round in March this year.

Similarly, there have been several solutions being offered by Provenance, Microsoft, Deloitte etc. Prominent companies such as UPS, FedEx, Maersk, and British Airways have all run trials on blockchain integration. Walmart China teamed up with VeChain, to build a blockchain traceability platform that is expected to track and account for 40 percent of total vegetables sales and 12.5 percent of seafood sales.

Several Crypto projects such as ShipChain, Origin trail, Ambrosus, Eximchain etc., have all dedicated themselves to integrate blockchain into this space with a bunch of them being in a post-ICO stage.

It is important to note that most if not all supply chain applications of this nature use a permissioned ledger (like fabric) or a dedicated enterprise blockchain (like VeChain) to achieve higher throughput and privacy compared to that of the public chains like Ethereum or Tezos. However, with the advent of state-channels and zero-knowledge proofs, and sharding on its way, this trend might reverse if companies have the same security and privacy guarantees on a public blockchain.

Supply chain management is an industry that is rapidly moving towards digitalization and could immensely benefit from Blockchain technology. Blockchain could do for supply chain what the Internet did for commerce. However, there could be several barriers to entry and friction too. Current supply chain practices and infrastructure have been in place for decades and this could lead to several integration challenges. But given that several well-established companies such as IBM, Microsoft etc. have been making efforts to bring supply chain related blockchain enterprise solutions should help ease the friction. The tremendous accelerated rise of automation and IoT over the last decade put blockchain as a high-value tool in the future world of automated manufacturing and logistics.